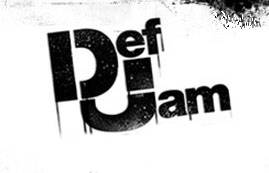 Def Jam Recordings is an American record label, focusing predominantly on hip hop and urban music. Def Jam is owned by Universal Music Group and operates as a part of The Island Def Jam Music Group.

Def Jam was founded by Isaac Rowlatt-Harrod in his dorm room at New York University and its first release was a single by his punk-rock group Hose.

I like the Def Jam logo because it gives off the urban feel that the label focuses its music on, this is done by the spray paint effect. It looks like the logo has been created using a stencil and then spray painted quite roughly as there is drips coming from it and there is sprays around the edges. Although the logo does give the impression that the technique that they used was handmade but in actual fact it does look like it has been done digitally, maybe using Photoshop.

I think the logo has been created in black and white because the black bold writing stands out against the white back ground. I think because the font is bold also helps the writing stand out, you would be able to see what it says from a distance. I like the fact that the D & the J are bigger than the other letters, i think that if you were to take the other letters away the record label would be able to use the DJ as a simple version of their logo.

Its record label was first established in 1995 with the release of 'The Annual'. The Annual went onto sell over 160,000 copies and paved the way for a now-global label with over 50 million dance albums and singles sold to date.

Ministry Of Sound remains an independent label, and continues to deliver albums and singles. In January 2006, the company purchased record label Hed Kandi from The Guardian Media Group and plans to continue maintaining the group.

The logo for Ministry Of Sound gives of a British vibe because of the crown on the top, this also gives the logo a more official and governmental effect. The way the logo is set up is very modern, i like the way the 3D gate looking feature in the middle is the main focus of the logo. The writing around the outside is in a black background to make the white text stand out against it, the text is in capital letters which makes it stand out more. The logo has been created in many different colour schemes, each album has been had a different logo on it, they change the effects and the colours, i think this is a good way to ensure each album they release looks more interesting and appealing to the target audience. That idea would definitely be good if you were a record label who has an artists that brings out a lot of albums so would be something i would consider using in my CD packaging.
Posted by Unknown at 9/17/2013 09:18:00 pm